We completed a Historic Structures Report for the Stone House Tavern in Chesterfield, NH for the Chesterfield Historical Society.

The report was funded, in part, by a grant from the New Hampshire Land and Community Heritage Investment Program (LCHIP) and will be used  by the Chesterfield Historical Society to apply for conservation funds and grants to preserve this historic building.

The Stone House Tavern was constructed in 1831 and is a 2 ½ story, Federal Style, Georgian Plan former residence and tavern. It was constructed to the south of an earlier wood-framed simple Cape that may have dated from ca. 1790. The tavern faces south toward Route 9, the ell faces west toward Route 63, and both have small setbacks from the roads. The five bay by four bay, forty-two foot by thirty-two foot tavern is symmetrical and has a rectangular footprint oriented parallel to Route 9. The building has an uncoursed stone foundation and a  late roof with boxed cornices. (The slate was likely sourced at the closest slate quarry in Guilford, Vermont.) The first and second stories of the tavern have coursed Gneiss walls with soapstone corner quoins, and the attic level has wood-framed gable walls with shiplap siding within pedimented gables. The underpinning has larger stone blocks than those of the walls above, and there is a narrow stone water table. (According to local historians Elinor and Gerald Morgan, in their 1983 report, the Gneiss was obtained from an outcropping of stone ledge about 100 yards west of the tavern, but this has not been verified) There are four equidistant brick interior chimneys, two at each roof slope near each gable wall. Molded wood cornices encircle the eaves and pediments. 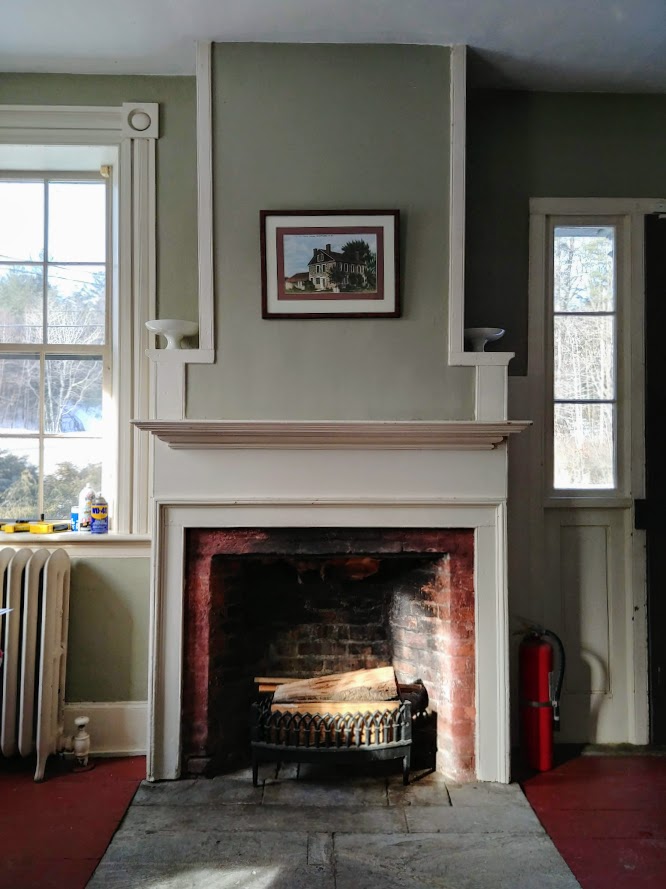